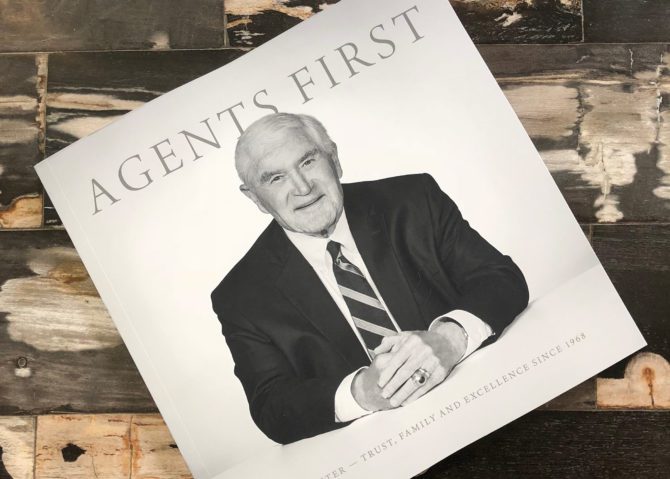 In celebration of its 50th year in business, Long & Foster published an official anniversary book in May. Produced in collaboration with Washingtonian Custom Media, “Agents First: Trust, Family and Excellence Since 1968” honors the company’s past, while looking toward its future. The book documents Long & Foster’s first 50 years in the real estate and financial services business, highlighting the company’s agent-focused culture.

The anniversary book recognizes the milestones Long & Foster has achieved since its founding in 1968, from the opening of its first office in Fairfax, Virginia, to its 2017 acquisition by Berkshire Hathaway affiliate HomeServices of America.  The book also features individual stories of several Long & Foster’s agents and employees, who have helped shape the company into what it is today.

You can view the digital version of the book at http://issues.washcustom.com/view/washingtonian-custom-media-publishing/long-foster.

Long & Foster Real Estate was once again been honored by the Richmond Times-Dispatch as one of the 2018 Top Workplaces in the Richmond region. The company earned the No. 1 ranking overall for Ethics, as well as the No. 3 ranking among large companies on the newspaper’s Top Workplaces list.

The Top Workplaces lists are based solely on the results of employee feedback gathered through a third-party survey, which is administered by research partner Energage, a leading provider of technology-based employee engagement tools. Several aspects of workplace culture are measured in the anonymous survey, including alignment, execution and connection. The survey was conducted from December 4 to December 18, 2017. Nine sales associates and teams with Long & Foster were honored as the country’s best Realtors—out of 1.3 million agents nationwide, according the latest REAL Trends’ The Thousand list. The industry news organization recognizes the country’s highest producing teams and individual agents by sales volume and transaction sides in its annual list, which was published June 29 in a special advertising section of The Wall Street Journal.

REAL Trends compiles rankings for The Thousand based on applications submitted from hundreds of sales professionals and brokerages throughout the United States. An independent third party verifies submissions for accuracy and evaluates whether an applicant is an individual or on a team. Nearly 170 Long & Foster sales professionals and teams were recognized as America’s Best Real Estate Agents by REAL Trends. The annual report ranks real estate professionals by sales volume and transaction sides for the 2017 calendar year, noting the leading agents in each state and metropolitan area. You can view the full report at RealTrends.com/rankings/americas-best.

Long & Foster Real Estate and Prosperity Home Mortgage donated $10,000 to help Ellicott City, Maryland, recover from a severe flash flood that occurred over Memorial Day weekend. The Ellicott City Partnership, which works to preserve the city’s historic district and support economic growth, worked closely with the local government to assess the needs of the community, collect donations and organize volunteer efforts. Long & Foster and Prosperity each donated $5,000 to the nonprofit organization. For more information about the Ellicott City Partnership, or to make a donation for the flood recovery efforts, visit HelpEllicottCity.com.

As of July 1, Mid-States Title of Southwest Virginia became part of Sage Title Group. Both companies are part of Long & Foster Settlement Services, and although Mid-States now has a new name, agents and consumers working with their team will still have the same great team and service they have come to know and love. Long & Foster has named Kenneth Fagan as senior vice president and regional manager for the company’s Southern Maryland regions. In this role, Fagan is responsible for agent recruitment and retention, business development and operations at the Southern Maryland region’s six offices, including its Mitchellville and Ft. Washington locations, where he also works as the managing broker. Long & Foster has named Forrest Odend’hal as senior vice president and regional manager for the company’s Northern Virginia and West Virginia regions. He will work alongside Karen Kidwell in leading the region. Odend’hal, who currently leads Long & Foster’s Alexandria/Old Town Historic District office, brings a wealth of real estate and sales experience to his new position.