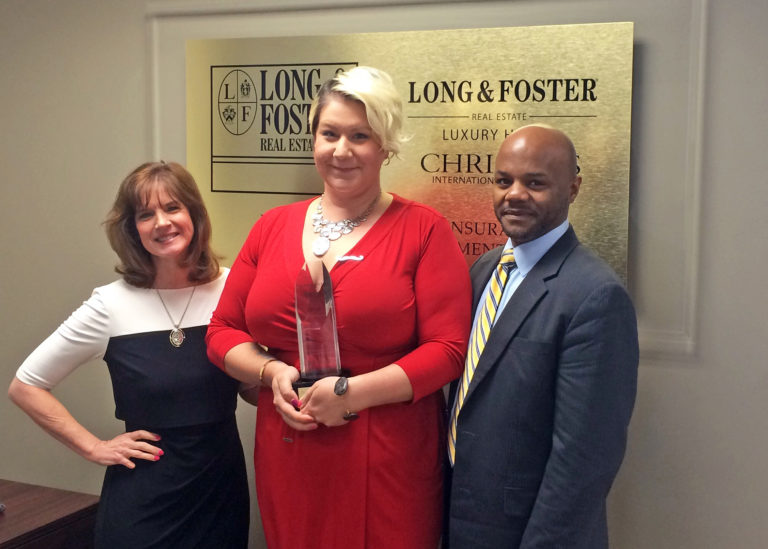 Nicole Canole, an agent with Long & Foster’s Alexan­dria/Kingstowne Centre Sales office in Virginia, has been named as the Rookie of the Year for the company’s Northern Virginia metropolitan region, as well as companywide. Canole has demonstrated great leadership and customer service in her growing real estate career. She sold more than $9 million in real estate volume in 2016, earning her a place on Long & Foster’s Gold Team. She also earned a spot in the North­ern Virginia Association of Realtors’ Multi-Mil­lion Dollar Sales Club. In late 2016, she was appointed to NVAR’s Leadership Institute.

Jo Cross, managing broker of Long & Foster’s Chesapeake office, has received the Code of Ethics Award for 2016 from the Hampton Roads Realtor Association (HRRA). The award recognizes a Realtor for their integrity and adherence to the professional standards in the real estate industry. Cross has been active in HRRA for many years and has served as chairman of the Professional Standards Committee through which she has provided leadership, training and education to the members of the association. She has been a Virginia real estate agent for the past 37 years.

R.T. Christopher, manag­ing broker of Long & Fos­ter’s Greenville, Delaware, office, has received the Mel Stout Ethics Award from the New Castle County Board of Realtors (NCCBOR). The Mel Stout Ethics Award is given in memory of longtime friend of NCCBOR, Mel Stout. The award recog­nizes agents who are members of NCCBOR for upholding the same high level of ethical and moral standards that Stout lived his life by. In addition to being presented with the award at the NCCBOR’s annual awards event, a donation will be made in Christopher’s honor to the Dela­ware Housing Opportunity Fund.

Mia Burch, an agent with Long & Foster’s Pike Creek office in Delaware, has received the Realtor of the Year award from the New Castle County Board of Realtors (NCCBOR). The Realtor of the Year award is given to an NCCBOR Realtor member who exemplifies an enviable record of volunteer service to the NCCBOR, the Delaware Association of Realtors and the National Association of Realtors. He or she must also rate high in the areas of sales achievement, ethical conduct, professional­ism and knowledge. Burch currently serves as president of the NCCBOR.

Charity Cox, a Long & Foster agent at the company’s Staunton/Waynesboro office in Virginia, was recently honored for having the highest number of real estate sales among all Long & Foster agents in 2016. Cox has 14 years of experience in the real estate field and strives to make the home buying and selling process as fun and memorable for her clients as possible while minimizing stress. She focuses on the Staunton, Fishersville and Waynesboro areas and sur­rounding communities, and has worked with clients through every stage of homebuying, whether they’re first-time buyers, move-up buyers or downsizing buyers.

Fonville Morisey Realty claimed six winning spots in the Triangle Business Journal’s annual list of Top Residential Individual Agents and Top Residential Teams. The top listings were ranked by gross sales closed by agent/team in 2016. The individuals on the list closed a total of $83,747,008 in 2016, and the teams closed a total of $96,147,370. The six winners are listed below.

Fonville Morisey Realty recently named its 2016 company-wide associates and teams of the year. The award winners range from individuals to teams who are the top selling, listing and listing sold associates of the company from the previ­ous calendar year.