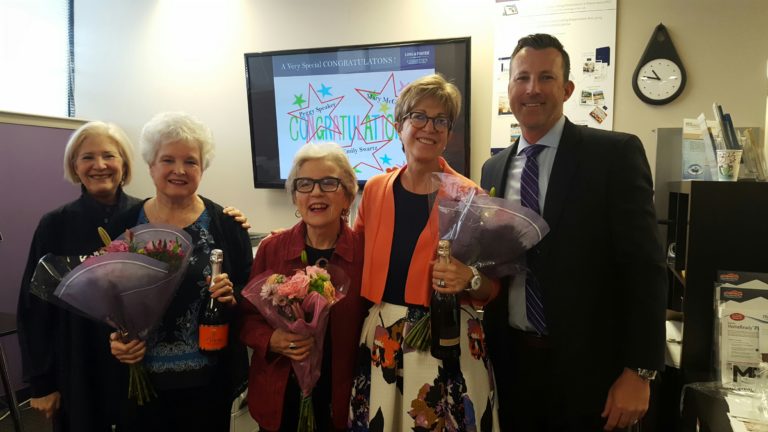 Emily Swartz, Mary McGuire and Peggy Speaker, of the Speaker of the House Team, each recently celebrated 30 years as sales agents with Long & Foster. They are affil­iated with Long & Foster’s Chevy Chase Uptown office in Washington, D.C. Swartz is a member of Long & Foster’s Gold Team and is a life member of the Greater Capital Area Association of Realtors’ Multi-Million Dollar Club. McGuire is an associate broker and a million-dollar sales award winner, and she specializes in D.C. and southern Montgom­ery County, where she has lived since 1965. Speaker ranks among the country’s top 1 percent of agents, is a past president of the Gold Team and regularly lectures on industry procedures and techniques.

Valeria Alphin, a sales agent with Long & Foster’s Roanoke office, has been chosen by the Virginia Association of Realtors to participate in its Leader­ship Academy. The Leader­ship Academy is responsible for cultivating the talent of established and emerging Realtor leaders from across the Commonwealth of Virginia. A class of no more than 20 members is selected for the academy and those chosen will work to build leadership skills and enhance their professional development through a series of three immersion retreats.

Phyllis Hoag, a sales agent with Long & Foster’s Alexan­dria/Kingstowne Centre Sales office in Virginia, has earned the prestigious Realtor Emer­itus status from the National Association of Realtors. The Realtor Emeritus status rec­ognizes that Hoag has been a member of NAR for more than 40 years and is a valuable and lasting contributor to the real estate pro­fession and to the community.

Donna Harris and Walter Grewe Appointed to RVAR Board of Directors

Donna Marie Harris and Walter Grewe III, sales agents with Long & Foster’s Roa­noke, Virginia, office, have been appointed to serve on the board of directors of the Roanoke Valley Association of Realtors. Harris was appointed as immediate past president. She has been active in RVAR for 11 years and has served on its board of directors and MLS Policy Committee. Grewe has been active in RVAR for nine years. He has served on numerous RVAR committees, including the Public Relations Committee and the Education Committee, where he was chairman. He also previously served on the RVAR board.

Michael Dotti, a sales agent with Long & Foster’s Lake Gaston sales office in Virginia, has been voted as the “Best of the Best” real estate agent by the readers of the Brunswick Times-Gazette. Dotti has been a professional in the real estate industry for the past 15 years. He holds a real estate broker’s license in both Virginia and North Carolina.

Donna Travis Honored as Realtor of the Year by NRVAR

Donna Travis, a sales agent with Long & Foster’s Blacks­burg, Virginia, office, has been awarded Realtor of the Year from the New River Valley Association of Realtors. The Realtor of the Year Award is given to selected Realtor association members who are faithful to the principles of good real estate practice and laws, adhere to the Realtor Code of Ethics, show high integrity and have served their profession and their community. Agents chosen for the award are often involved in local civic service organiza­tions, charitable activities, boards, committees, councils and more.

John Powell Appointed to REIN Board of Directors

John Powell, managing broker of Long & Foster’s Shore Drive- Coastal office in Virginia Beach, Virginia, has been appointed to serve on Real Estate Infor­mation Network’s 2017 board of directors for a two-year term. Powell has participated in many Realtor associations and multiple listing ser­vice organizations since starting his real estate career in Richmond, Virginia, in 1986. Powell became a member of the REIN MLS when he was appointed as managing broker of Long & Foster’s Shore Drive-Coastal and Virginia East­ern Shore offices in 2014.

Long & Foster’s Scott Shaheen and Christina Royal of Virginia Properties, a Long & Foster company, were named as this year’s Foster Cup winners. Sha­heen is the senior vice president and regional manager for Long & Foster’s Richmond, Southwest Virginia and Hampton Roads regions, and Royal is the manag­ing broker of Virginia Properties, located in Richmond. The Foster Cup is given to candidates who have achieved excellence in real estate. Shaheen began his real estate career in 1990 and was promoted to senior vice pres­ident and regional manager in 2004. Royal began her real estate career in 1976 and became supervising broker in 1984.

Jeremy Johnson Named Realtor of the Year by HRRA

Jeremy Caleb Johnson, a sales agent with Long & Foster’s Shore Drive-Coastal office in Virginia Beach, Virginia, has received the Realtor of the Year award from the Hampton Roads Realtors Association. The HRRA’s Realtor of the Year award is given by the Circle of Excellence, an annual awards program recognizing top-pro­ducing Realtors in the Hampton Roads area. Johnson received the award by attaining a high level of achievement set forth by rigorous sales criteria, through professionalism, due diligence, customer care and attention, as well as a strong knowledge of the industry.

Elizabeth Lucchesi, leader of The LizLuke Team of Long & Foster’s Old Town Alexandria office in Virginia, has been named as the 2017 small busi­ness philanthropist of the year by Volunteer Alexandria. The organization, which works to match volunteers with opportunities to give back, chose Lucchesi based on her strong commitment to the community. Lucchesi will be honored at Volunteer Alexandria’s 19th annual Alexandria Business Philanthropy Summit on April 27.