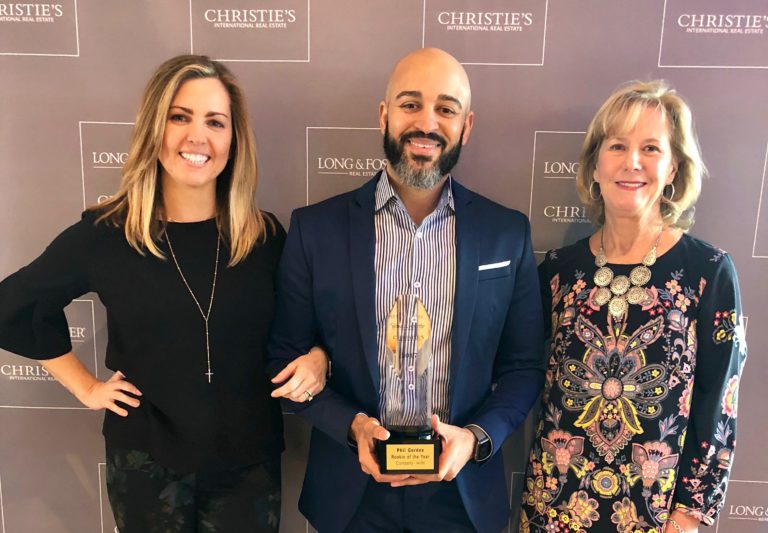 Phil Gerdes, an agent with Long & Foster’s Annapolis Fine Homes Sales office in Annapolis, Maryland, was named as the 2017 Rookie of the Year for the company’s Baltimore region as well as companywide.

Phil Gerdes, an agent with Long & Foster’s Annapolis Fine Homes Sales office in Annapolis, Maryland, was named as the 2017 Rookie of the Year for the company’s Baltimore region as well as companywide. Gerdes has demonstrated great leadership and customer service in his growing real estate career. He sold more than $12 million in real estate volume in 2017, earning him a place in the Founder’s Club of Long & Foster’s Gold Team. He also earned a spot in the Anne Arundel County Association of Realtors Master’s Club, for having at least $6.5 million in settled sales volume.

John McGoldrick, an agent with Long & Foster’s Chincoteague Island office, ranked among the top five selling agents in the Eastern Shore Association of Realtors for his 2017 sales. McGoldrick had sales in excess of $9,516,800 in 2017. ESAR covers both Accomack and Northampton counties on Virginia’s Eastern Shore.

The Daily Record has recognized Suzi Padgett of Long & Foster’s Columbia, Maryland, office for her success and achievements in real estate. The Baltimore-based publication selected Padgett for its 2018 Real Estate Matters award in the category of Distinguished Real Estate Agent. Founded this year, the Real Estate Matters awards honor Maryland real estate agents and brokers in several categories. Padgett said this award is a tribute to the combined efforts of all the agents in her office.

Camille W. Mims, CRP, vice president of Long & Foster’s Corporate Real Estate Services (CRES) division, was a speaker at the Leading Real Estate Companies of the World (LeadingRE) annual conference. She spoke during the LeadingRE Conference Week in Las Vegas in late January, participating in a panel discussion called RELO Therapy: Lessons from Legends. In the panel, Mims shared insight and answered questions regarding the most challenging scenarios that relocation professionals encounter in today’s environment.

Jennifer Sowers, an agent with Long & Foster’s New River Valley office, was recently appointed as chair of the Christiansburg Town Planning Commission. The Christiansburg Town Planning Commission is responsible for the review of land use and zoning matters. Sowers will serve on the board for the next year and for the foreseeable future. A Realtor since 2001, Sowers has been with the New River Valley office for 17 years, and has received numerous awards for her service, dedication and ethics.

Long & Foster agent Daniel Schuler was honored as a finalist for Realtor Magazine’s 2018 Class of “30 Under 30.” Schuler, 29, is a Kensington, Maryland, native and a member of Melinda Estridge’s real estate team. Schuler said he thrives on the competitive nature of real estate in the U.S. capital region, and his clients benefit from his background in architecture because he can help them visualize improvements they might want to make to a property. In 2017, he represented buyers and sellers in $15.7 million in sales, with 28 transactions.

The real estate team of Vickie Zevgolis and Larry Lewis has received the Top Residential Team Award for 2017 from the Southside Virginia Association of Realtors. Zevgolis and Lewis are affiliated with Long & Foster’s Tri-Cities Southpark office in Colonial Heights, Virginia.

Larry Lewis, an agent with Long & Foster’s Tri-Cities Southpark office in Colonial Heights, Virginia, has received the Associate of the Year Award from the Southside Virginia Association of Realtors. The Associate of the Year Award is based on the nominee’s sales activity while maintaining a high level of participation in local or state association and civic involvement.